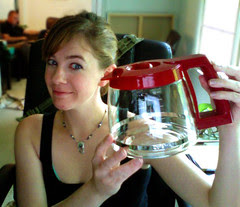 Second of all, look what arrived with perfect timing!? Editor Mixtape at Scholastic told me to keep my eyes open for a package in the mail; something to celebrate my release day and getting LINGER off to production. I had to open it in the post office parking lot and then proceeded to laugh like a crazy person.

In case you can't tell what it is, it's a red coffee pot.

It's not even used.

In order to understand the significance of the red coffee pot, I'm afraid you will have to read SHIVER and then read LINGER. And then you will come back to this post and laugh at David's cleverness.

Until then, I'm afraid you will just have to take my word on it that it is very, very amusing to me.

Okay. So, secondly! I promised I would post the playlist for SHIVER today, and indeed I will. I made one on playlist.com, but unfortunately they were missing a few tracks. So I'm going to give it to you straight, then embed the one that playlist had, which you can actually listen to. Savvy? Yes.

I'm very sad that I can't find an online version of "Peter Returns" because DAMM it's perfect.

Basically, I listened to Snow Patrol, Joshua Radin, and Imogen Heap nonstop. Also, Blaqk Audio, although I doubt this will evoke a very Shiver emotion in anyone else. I'm not sure why it worked for me -- I felt a little silly including that one that I used to write the nookie scene, but in the interests of full disclosure . . .

Actually, it's funny to see how varied the playlist for LINGER is in comparison, because of the influence of iTunes and how I could buy individual tracks. Huh. There's an anthropology paper in there somewhere, folks. A boring one, but one nonetheless.

And finally, I have several audio books of SHIVER that I can giveaway in various contests or drawings or something. Do I have reader interest in such things?
Posted by Maggie Stiefvater at 12:03 PM

Me me me!!! Although I have read SHIVER ...i love audiobooks. They keep me sane during my daily 2hour commute.

I am trying to think of the best way to disseminate without causing me LOADS of work. I'm thinking I will give out copies to people to hold contests -- one for them and one for them to give away on their blogs maybe . . .

YESSS!!! Thanks Amazon god! I got my copy of Shiver. Yay! It's one of the most perfect werwolf book EVER!! LOVE IT 100%!

YAY for you and your official SHIVER day! Hey, that should become a national holiday, don't you think?

and OOOOOh, audio Shivers! I love listening to audiobooks while I'm working... if you give them to blogs for giveaways, make sure you let us know!

(This is the same Sarah as Bookduck on Livejournal) Congratulations on Shiver Day! And thanks for sharing your playlist :D

...and I'm sure you'll have reader interest in audio book giveaways. I know I'm interested.

Congrats on the release of Shiver! Can't wait to read and listen to this music while reading. I am sure to cry at the end just because I'll now be thinking about Peter Pan, my first love. I am certainly interested in the audiobook and I have a blog that can be used to give one away. =)

Marisa, I'm still formulating the audio plan but it is slowly coming into shape.

Sarah, thank you! And more on audio books shortly . ..

Jazz - Thanks! And I love that new version of Peter Pan SO MUCH.

great thanks. I just sent you an email regarding a blog interview and the decatur book festival :)

This playlist has SUCH a fantastic feeling to it! Augh! Can it be Linger time now?? LOL

Speaking for the Mundie Moms... we'll totally do a contest for Shiver. :)

is shiver going to be made into a movie? i love the book and do NOT think u deserve all the harsh criticism that u keep getting.. the book is not anything in relation to twilight and never will be.. people are just stuck with the image of edward and bella in there heads.. when i read this book, i see a love story about a boy and a girl , and the feeling that true love exists flows through my brains.. i loved this book!

It's been optioned by Warner Bros., so maybe! And thanks, I'm glad you loved it. I can't complain, though, because for every negative review there are dozens of positive ones. I'm quite lucky!

Ohmy... this playlist is amazing. I know this is an old post, & you probably don't reply to comments on it anymore, but this playlist is... everything I imagined while reading 'Shiver'. I have added every single song on this to my ipod & plan on listening to them all as I re-read Shiver in anticipation for 'Linger'
<3 Morgan.

I'm so glad you love it, Morgan!

So glad that Linger finaly came out, i already read it twice! Canot wait for Forever!!!
And i loled at the red coffe pot thing by the way.