As promised, I'm revealing the cover and first paragraph of LINGER today. A little bit about LINGER, for starters -- it's the sequel to SHIVER, it's coming out July 20th, and it is about after. What happens after you discover there are werewolves in the wood, after you've fallen in love for the first time, after you've lost what you think you can't live without, after you've become someone you can't live with (and no, not all of these are talking about the characters you think they're talking about.)

It was also the easiest and hardest book I've ever written, coming off the heels of SHIVER's immediate and crazy success. I can only imagine that Chris, the cover designer, felt the same way I did writing LINGER when he was trying to design the cover for it, because the SHIVER cover was such a smashing success, how would he follow it?

Well, I think he did. Behold, ze official cover of LINGER! 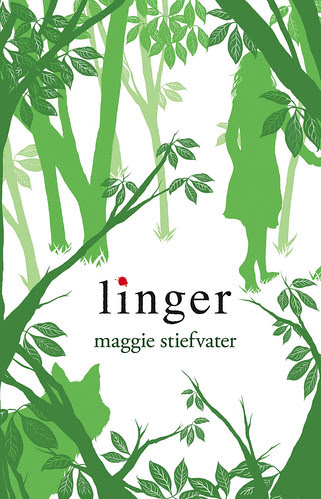 And now, the first paragraph(s). I've been asked a couple of times if folks can repost either of these things on their blogs and the answer is an absolute YES I'D BE FLATTERED PLEASE DO!!! Okay . . . the first bit of LINGER:

This is the story of a boy who used to be a wolf and a girl who was becoming one.

Just a few months ago, it was Sam who was the mythical creature. His was the disease we couldn’t cure. His was the good-bye that meant the most. He had the body that was a mystery, too strange and wonderful and terrifying to comprehend.

But now it is spring. With the heat, the remaining wolves will soon be falling out of their wolf pelts and back into their human bodies. Sam stays Sam, and Cole stays Cole, and it’s only me who’s not firmly in my own skin.

Is it what you expected?!
Posted by Maggie Stiefvater at 8:17 AM

To repeat myself, you tricky, tricky, evil wonderful woman. When I can't explain the worry knot in my stomach to myself after running through my checklist of excuses (FOR THE NEXT 10 MONTHS), I can say, "OH! Grace. I'm worried about Grace."

That's how you know you're good.

OMG we have to wait until JULY?? You are a cruel lady, Maggie. I can't take it.

And ooooh, gorgeous cover! Is the text going to be greenish, do you know?

Great teaser! Really excellent. Love the cover too. Both Shiver and Linger's covers convey such great atmosphere. Love them! Congrats!

OMG! I can't wait for the book! I'm so excited! And I love the contrasts of this cover to the cover of Shiver. So great!

Eek! Honestly, after the end of SHIVER, I wasn't sure where you'd go with LINGER. SHIVER ended so perfectly and completely! But after reading that beginning... I can't wait. The cover's lovely and springlike, and I agree with ElegantSnobbery - I hope the text is green! That was such a nice touch with the blue text in SHIVER. Yay! Thanks for sharing.

Oh man!! This is some intense foreshadowing!! why do you make us wait?!?!?!? It's slightly close to torture...I hope your giggling (evily of course) knowing what happens, and watching your dear fans cry in pain from not having the book ; )

Yes, indeed, I'm giggling evilly. Though you know, there ain't nuthin' that happens in Linger that wasn't foreshadowed in Shiver, so you guys should've . . . okay, COULD've seen it coming . . . ;p

SO EXCITED to read it this summer.

I am sooooo excited for Linger! I LOVED Shiver and it makes me a little bit sad that I have to wait until July to read the second installment. :)

Excellent teaser! And I love the cover. :)

I took advantage of your permission to re-post, by the way.

Thanks for the repost, Jessica! And thank you guys!!

So excited! Just got my best friend to read Shiver and she did it in two days.

I feel embarassed to ask this, but who is Cole???

Totally not fessing up to who Cole is!

I’ve never posted any comments but Shiver was SO amazing that I wanted to share. I had my sisters and best friend read it we averaged about a day each and all of us cried while we read the last 100 pages. We are hooked! Needless to say we love the cover and teaser for Linger and can't wait to read the rest!

Zilram, so glad that you loved it!!!

Ashley, i'm not giving anything else away! *evilgrin*

Man, Ms Maggie... The ending of Shiver, to me, had such unexpected happiness after the rollercoaster you put me thru, I almost dont want to read Linger! But I'll just have to, and try to find some brain bleach to erase the ending of Linger, if it makes me sad. Haha.

This is not fair! I can not wait until summer!

Not fair that i have to wait so long.I have to know what happens with Grace and Sam now! hahah Shiver was amazing so i know Linger will be too. Great cover too.:D

omg. so i just, like, right now, like 5 minutes ago, finished "shiver" and gosh darn you i didn't even know there was supposed to be a sequel. now i find out i have to wait until NEXT YEAR to find out what happens. oh this teaser. this is a little bit evil. thanks so much for writing a fabulous book, and what i'm sure will be a fabulous follow up. but i need to know, will there be even more? are you planning a trilogy? or a longer series? please spill at least that detail

It's a trilogy, Tess! :D So glad you loved it! And thanks, Xhantell!

Thanks to Myra I had to buy Shiver. I just finished it and OMG I LOVED that book!!!

I wondered if that bite from Shelby would affect her. I knew we weren't done with Shelby yet. But damn it's going to be hard to wait that long for the next book. And then the next!!!

Yay, Myra! I'm so glad you loved it, Solvang! And Laudia, no waaaaaay am I fessing up to who Cole is.

Ohhh I got chills!

I CAN'T WAIT THAT LONG

Sorry for the caps abuse.

OMG I'm so excited for Linger. I finished Shiver a few months ago and was astounded with how great it was. I had no idea there was a sequel coming out! :0
I'm attempting to write a weewolf book, too. Tis gonna be called 'The Demon Club'. And because you wont fess up about all the details, thou shalt not telleth you abouteth my booketh...eth...eth. -Cough-

Anyway, thank you for blessing my life with this great novel, soon to be novels.

So, I for real squealed and clapped my hands when I found out Linger was coming out in July instead of August or September like I thought it was, since Shiver came out in August. I'm relieved that I'm not the only one who isn't sure who Cole is.

I haven't commented on here before, so let me say how much I sold Shiver and how easy a sale your book is. I work at WaldenBooks, and I ALWAYS recommend this book to anyone looking in YA, and I can usually get them to buy it. I sold four last week, three in one day. I didn't even want to like Shiver. I'm not a werewolf person (I've always preferred my main characters to run several degrees colder), but before I knew it, I was halfway through the book in one sitting. The next sitting, I was finished, and almost crying, and I never, ever cry at books.

Shiver is my new favorite book. I haven't been this excited about a teenage book since I read Twilight way back in 2005 only a few months after it came out, and really, I think I like this better. It keeps calling me to re-read, but I don't have time!! Especially since you said that everything has been foreshadows, and I'm usually good at predicting books. I adore Sam and Grace.

Oh, July, you are so very, impossibly, achingly far away.

Bridgette, what an absolutely wonderful comment -- I am thrilled to hear you loved it enough to handsell it. And YAY CRYING. :D Thank you so much!

Just want to thank you for the great book! This book got to me like no other ive ever read o: Greatest book and i love it! Cant wait for the other two :D Love the characters aswell and when i read the end it brought me to tears So thanks for such a great book! <3

You're so welcome, Crissy!!

Maggie Stiefvater
Your book was beautifully written. I read it in about 3 days.

My teachers at school usually have an easier time getting me to put my books away.
But I couldn't stop reading this one.

I myself would love to be an author, to have people read my stories and be as touched as I was with yours.

I can't wait for Linger, and to be so drawn into a book more then I ever have been before.

Thank you so much for writing Shiver.