The Making of the Linger Trailer, Part One

Okay, on Friday I posted the stop-motion trailer I made for Linger, and I promised a making of blog post. Only, when I wrote it out without photographs in a document, it was four pages long. So I think I'd better make this a multi-part series. So here goes, part one. (you can click on any photograph to see it bigger).


First of all, I should say, I have always loved animation, and stop-motion animation in particular (anyone else remember those California Raisins shows from the 80s? I was all over those). So when I say that this trailer took over 60 hours of work, know that I did it because I love tinkering with this stuff, not because all authors really ought to be spending a lot of time with exact-o knives and rubber cement in order to be successful.


Anyway. Here, first of all, is the trailer, in case you haven’t seen it already. 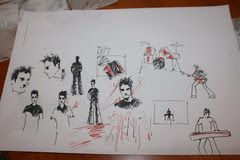 My first step in any art project is rough sketches, to get an idea of what I want the project to look like. Early sketches for the trailer, as you can see, were wildly different from the final project. I was considering doing traditional animation and laying down a more electronic/ techno track and . . . in the end, I just wasn’t feeling it.


So they got thrown out, and I went with an old, old trailer idea I’d had back when I first started writing Linger. At the time, I wasn’t sure I could pull it off. But now, I was feeling ballsy. So I started to storyboard it. This is sort of like . . . pretend animation, with massive amounts of frames missing from in between each step. Basically I just want to get an idea of the big moments and cunning camera angles I might want to try. Now that I think of it, my storyboarding is a lot like my synopsis-writing for my novels. 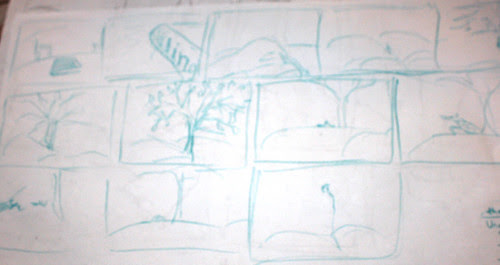 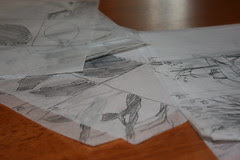 Once I had a very rough storyboard, it was time to do some equally rough animating. Paper cut outs are fun and thrilling (I think we can all agree that this is a universal principle of life). But they are not fun to experiment with. They take too long and they can't really be changed once they're done. So I did a few hundred sketches with tracing paper, then a few hundred photographs of tracing paper, and put them together to see if I had anything that looked like it was vaguely pretty.


Which turned into this. Rough animation.


It looked a little like a real boy, so it was time to do the paper cutting. So out went the frames on a table for consultation. In this case, my kitchen table since my desk had somehow shrunk to a uselessly small toy overnight. That boombox you see in the background was playing things like Wakey!Wakey! and Broken Bells and Snow Patrol and Blaqk Audio and, when things got very dire, Jon Secada. 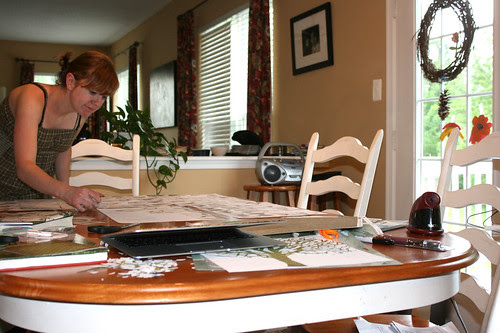 There were a lot of frames. 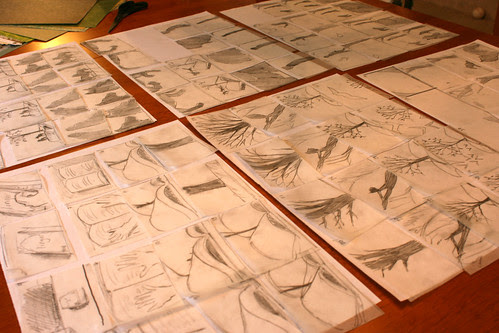 A lot of consultation. 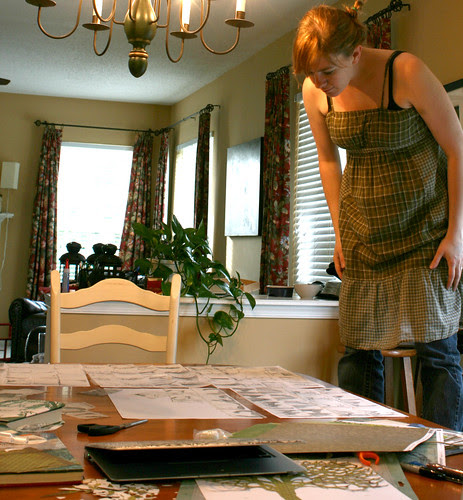 Then I started to cut.

I think that better conclude part one. It's already pretty stinkin' long. Hopefully you're still entertained.
Posted by Maggie Stiefvater at 7:27 AM

You know what I love about you? That you take risks and try whatever you want, because you LOVE to, and because you believe you can.

Yeah, I got that deep understanding out of your paper cut outs. But they are pretty brilliant, fun and thrilling which of course is a universally accepted truth :)

Crystal, thank you. And I hope I never change or become less fearless.

Jonathon, I cannot take credit for the curtains. But thank you.