On Friday, the Merry Sisters of Fate had our first ever joint public appearance at KidLitCon, talking about critique partnerships.

Many exciting things have happened, like being treated like a rock star in Lithuania and hitting number on on the bestseller list, but let me tell you, seeing this in a marquis was a fine, fine, fine thing. 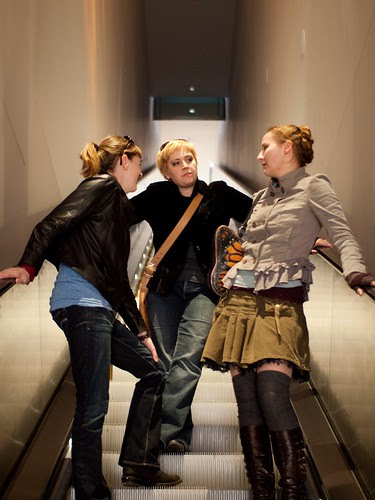 Plus, we got to have lunch with Editor Yoda (Andrew Karre), who is one of my favorite people, and who will be editing the Merry Sisters of Fate anthology/ weird thing that we're doing with Carolrhoda. We spent all afternoon talking about books and wounded gazelles and other things that we needed to get caught up on, and then we had our panel at the Loft. It was so incredibly nice to see so many people there that we knew from online. Also, it was nice to have two other people to be clever with me. So I only had to be 1/3rd as clever as I was on Saturday and Sunday, when I had to give talks all by myself.

So right after my talk on Saturday, I had to fly out to Virginia for another talk the following morning. I had a connecting flight, so it took me from noon until 7:30 p.m. to get back to Virginia, and then I had another two hours to drive to the hotel where my Sunday talk would be. I was feeling tired from my European tour, sad that I had to leave Tessa and Brenna behind, sad that I had another day before I could go to my part of Virginia where home and Lover are, and hungry because my preservative allergy means that airplanes and airports are a hunger-strike zone.

On Friday night, a reader -- Sarah -- had given me a mix CD. I remembered it then, getting into my car at the airport, and I put it into the CD player. And it was exactly my kind of music. It was like a mix CD I would've made for myself, only most of it was music I'd never heard before. It was like being home again. If you saw a car barreling along at 85 miles an hour down I-64 on Saturday night, a big smile on the driver's face, that was me. Thanks, Sarah, if you're reading this. 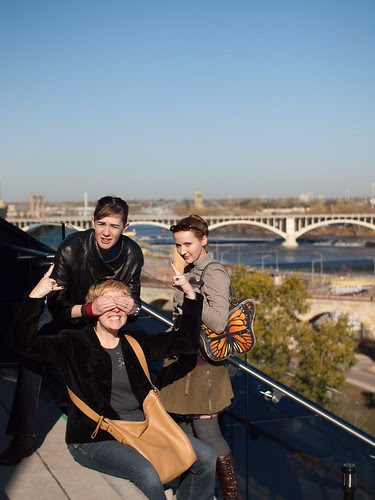 Posted by Maggie Stiefvater at 6:42 AM

I want to steal Brenna's outfit! Glad you all got to talk together--having CPs there make it so much more fun!

I enjoyed your keynote very much and it was fun to hear you and your Merry Sisters together. So great that you all found each other and have such a good thing going! Glad that you were able to visit the Guthrie, too! Looking forward to reading Shiver and wishing you all the best!

@Frankie - you and everyone else! (re: Brenna's outfit)

@adrianna - Most people's aren't. For starters, most people probably get to sleep a lot more than me. ;p

@Nina - thank you so much! I'm so glad it was enjoyable to listen to because it certainly was a good time.

I love Brenna's butterfly bag. It is awesome.

And I so wish I could've been at that talk- it would've been great to meet Brenna and Tessa and of course see you again, though I'm sure you're sick of me by now, lol.

I was at KidLitCon in Minnesota. :) Loved your speech by the way. Especially when you talked about your sweet boots.

Thank you for the blogging tips at Kidlit Con. It was especially fun to hear about your Painting-a-Day gig and how it widened your sphere. Moose should be in the GUINNESS BOOK OF WORLD RECORDS for "most painted cat". A.

Amy, I think you're right!

Looskie -- THANK YOU. And yes, I love my books.

James -- EVERYBODY wants that bag. And you would've had a good time there, promise.