I think I've pretty much proved that if I don't blog while I'm on tour, it takes me three million years to blog about it. Lesson learned. I also have learned that when I am in the final throes of a novel, I never eat, cook, sleep, vacuum, answer blog comments, or look at e-mails. So for everyone who is suffering because of Secret Novel's January 1st deadline, I apologize. All will return to normal in 2011. Also, I will say more about Secret Novel in 2011. Promise.

But until then, I need to blog about the last stop on my 2010 European tour: Bulgaria. I was unable to find out too much about Bulgaria before I left. Mostly I found out they had mountains, the sixth fastest internet in Europe, and had two kinds of cheeses. I was also told that the Bulgarians were not prone to small talk. I later found out that two of these facts were incorrect.

So the trip began auspiciously. We arrived atrociously late but despite this, my smiling Bulgarian publishers were waiting at the airport to greet us. WITH FOOD. With some sort of Bulgarian bread thing, to be precise. It came in handy as I sat in my hotel room. I ate it while rewriting the last scene of FOREVER and then cackled through a mouthful of Bulgarian bread crumbs as I hit send and sent the absolute final version of FOREVER to my publisher to be typeset.

The next morning, it was off to be interviewed and to see my publisher's booth at the book fair. Look who I found at the booth! 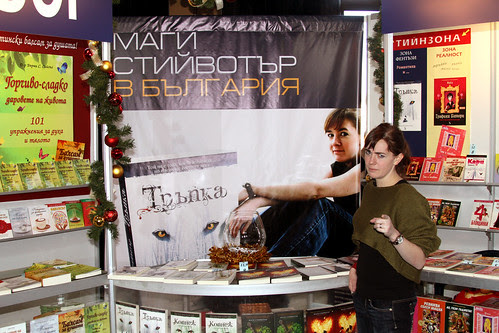 My interpreter frowned at it. 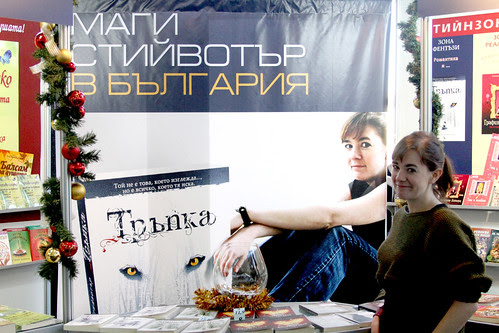 Anyway, then it was time to meet Bulgarian fans. I was uncertain whether or not I had any Bulgarian fans, so I was delighted to find out that not only did I have Bulgarian fans, but they read the blog and knew about Secret Novel. These are a few of my favorite things. 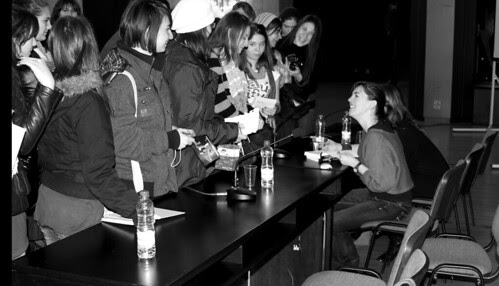 That is me and my interpreter beside me as I speak no Bulgarian (well, now I can said Zdravei! which hardly counts). I was amazed at how many of the Bulgarian teens spoke amazing English though -- and tried really hard to make me feel at home. 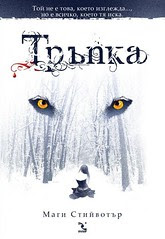 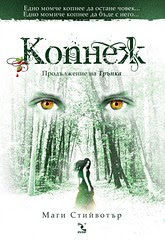 Well, these are the guys responsible. 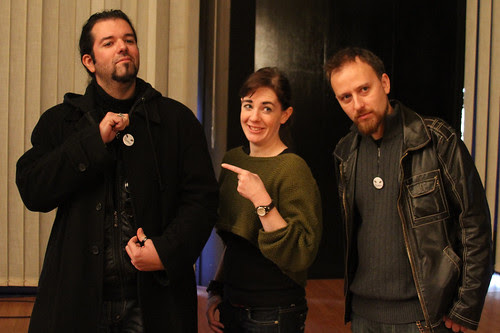 They are wearing Shiver buttons, which is what I'm pointing too. I did have this conversation with my Bulgarian translator.

I still am not exactly sure what most of my conversation with my translator meant. But that was okay.

Further exploits in Bulgaria included a drive to Plovdiv for a signing.

This is what comes from talking about things that you do on your blog, I expect. There was indeed a giant white grand piano that Elton John would've been proud of, and there were indeed readers waiting for me to play it. I talked about the books and kept thinking they would forget about me playing, but no, their keenness remained, so I played the piano for them. They were happy. I was happy. The piano was happy. Then we took a frigid and beautiful wander through Plovdiv's historic area. I would show you pictures, but I couldn't take my hands out of my pockets to operate my camera. I do, however, have photos of the gorgeousness that was Bulgaria's mountains.

At one point, we drove by a field on fire. My publishers were not pleased as they said it made everything stink, but I thought it was pretty much the most gorgeous image of the entire tour and promptly decided to set something on fire in Secret Novel when I got home (and I did, thanks, Bulgaria). (I highly recommend clicking on this photo to see it bigger) (it is still not as awesome as it was in real life). 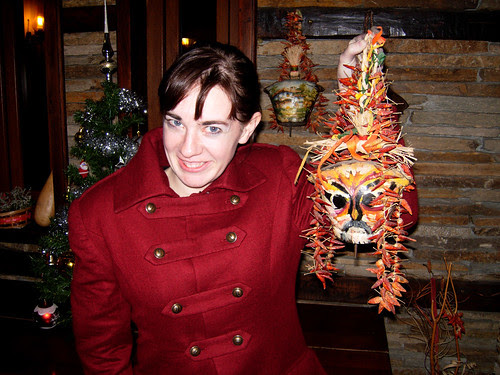 It's always good to see (or carry) a friendly face. 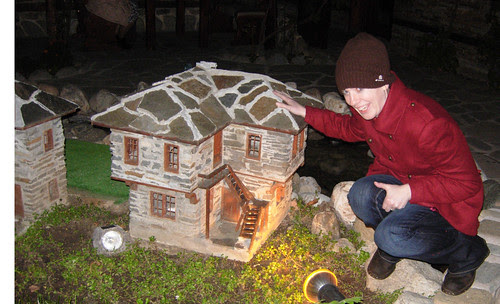 They did tell me that houses tended to be smaller in Europe.

Then it was time for the event to end the whole tour: the Masquerade Ball. Blog readers will have already caught wind of this before, because this was the moment when fans came dressed in costume, book trailers were judged, Bulgarian actors were acting as MC, and Maggie was called up in front of the whole lot of them. And told to play the Bulgarian bagpipes. If you missed it, that story is here. Complete with sound effects. 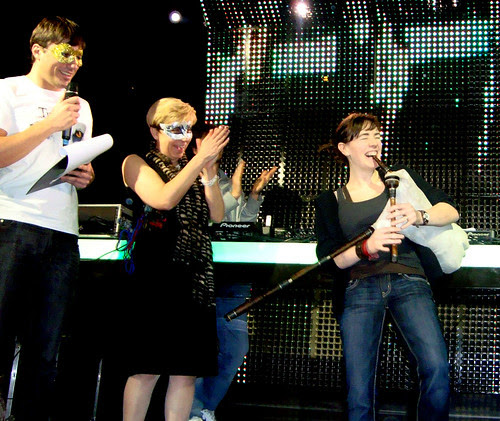 And then they taught me how to do the Bulgarian chain dance. And by "taught," I mean, called me down to the floor and had me dance until I looked like I knew what I was doing. 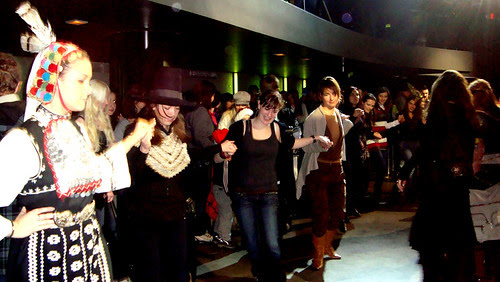 I did get to take the bagpipes home, which was extremely cool. Actually, the entire thing was terribly cool. My Bulgarian publishers pulled out all the stops and pretty much guaranteed that 2010 is going to stick in my head for the rest of my life. I would say thanks in Bulgarian . . . but it turns out, they just say "merci."

It's a lovely sort of circularity, isn't it?