In Which Maggie Helps With Homework

Currently sitting in my inbox are about 14 requests for information about my life from eager students doing projects on me. They claim that my wikipedia entry just doesn't cover it and ask for more.

I'm not sure there is more. Not only that I'm willing to share, but is actually worthy of a school report. I am not George Washington.

But in the interests of encouraging A students everywhere, here we go.

1. I was a small and cranky child. I threw my food on the wall and, memorably, threw myself down on a mall floor and shouted DON'T BEAT ME LIKE YOU DID LAST NIGHT!

2. My parents did not beat me.

3. I was a Navy brat. We moved a lot. Mostly to places with mosquitoes (Florida) and places with fire ants (California). The Navy only buys properties made cheap by the presence of nefarious insects.

4. In California, it was so hot at the school that they had mandatory snow cones and when you stood in line for them, the asphalt melted the treads on my shoes.

5. I had several bands in college. I considered the name Mandatory Snow Cones. Also Ripping Hags. Ultimately, however, my most successful one was a Celtic band called Ballynoola (but first Murphy Himself and also Widdershins and, very briefly, That All Girl Band With the Guy Guitarist). I also had a band called The Harvest Moon Quintet (our most memorable gig involved senior citizens setting a tablecloth on fire) and one that lived and died so briefly that it had no name at all. 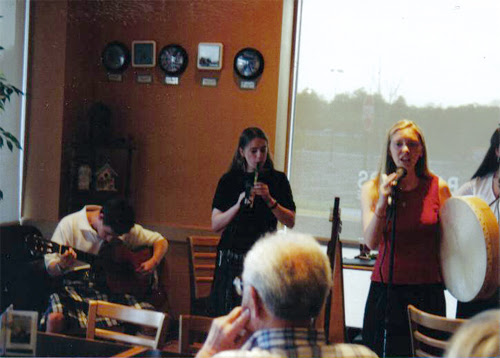 Yes, that guitarist is wearing a kilt.Yes, that is me with the tin whistle and the small harp beside me. Yes, that is our lead singer, Erin Hill.

6. That guitarist was wearing a kilt probably because we'd just come from band practice. And by band practice, I mean the Mary Washington College Pipes & Drums, of which I was pipe sergeant. Pipe sergeant = spends every free weekend at band practice, Scottish festivals, competitions, or generally wearing wool and being loud. I practiced two hours a day. AND I LIKED IT. Ah, there I am in the smallest shirt they made, a man's size small, because of course chicks don't play bagpipes! 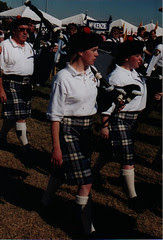 7. I really did warn you that there was nothing of note in my biography.

8. All this time, I was writing bad novels. No, really. They're bad. Check it out. I wrote about 30 of these things from age 10 on. Some of them had ends. Many of them did not. By 16, I was sending out query letters. Sorry, editors.

9. Luke Dillon first appeared in a novel I wrote when I was 16. In this iteration I am sad to say that he was in possession of a lucky pig. At the time I didn't understand how this was not the sexiest of faerie animals for a hero to accompany.

10. I was home-schooled from 6th grade on. Before that, I was beleaguered by nuns at Catholic schools. I was a good student apart from punching people.

12. Ha, you thought I was going to tell you what it was originally. It's not a secret, but google has to be good for something, right?

14. In college, I used to sneak into class before anyone got there and write jokes in Latin on the blackboard or illustrate scenes from history with giant cartoon talk bubbles.

15. I was a history major. British history. I was a geek, wrote two senior theses BECAUSE I LIKED TO, a 4.0 major, and a member of Phi Alpha Theta though I never went to any of the gatherings because in college, I hated people unless they were holding a musical instrument and sometimes even then. It's also the first time I got something published (it was about 14th century Scotland, don't get excited) and the first time I won an award (it was also about 14th century Scotland, you can still hold the excitement) Behold, I still have a very few of my books from then. 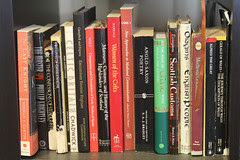 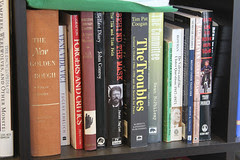 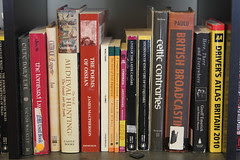 Oh hey now, don't you all fight over who gets to borrow them first.

16. In college, I tried to get into a creative writing class and they told me my writing wasn't promising enough.

Now, if you can use this information to show how I became an author, you deserve an A. Also. Here is my wikipedia entry, in case you decide I was useless.
Posted by Maggie Stiefvater at 8:47 AM