From Rough to Final: A Dissection of Revision

I should hurry to say that this chapter is pretty typical of how I wrote this book, but your results may vary. I do a lot of my plotting and brainstorming in my head before I ever sit down to the computer, so, unlike some of my writer friends, you don't see my thought process evolving on the paper as much as you might suspect.

With that in mind and the apology that this blog post will be very very long, here is the rough draft. 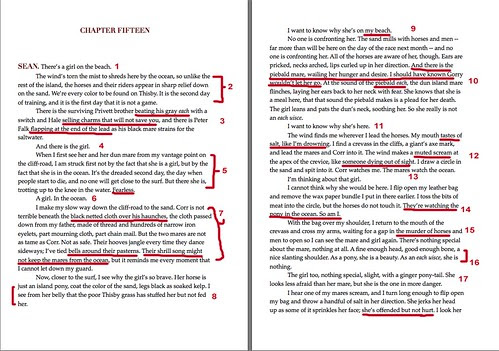 1. The first line, to me, is about the purpose of the scene; the mood I’m trying to set; the “mission statement” for the chapter. Edges — the first and last sentences of chapters, paragraphs, novels — are incredibly important for the work they do in the reader’s subconscious.
2. This paragraph is to set the scene. I want the reader to be able to “see” in their mind’s eye where the action is taking place for the rest of the scene. If I hold off on this information until later, the reader might set up a different image in their head and be startled when I tell them MY version of the location.
3. This paragraph looks like it’s about setting, and it is, but it’s also about Sean and what he thinks of the other people on the beach. The details he chooses to highlight emphasize how he finds them incompetent. Word choice: Privett is “beating,” not “disciplining.” Hale is selling charms, but Sean’s contempt of them is “that will not save you.” And Falk is “flapping,” barely more than an inanimate object. Sean is all about control, and everything in this paragraph shows how he views those who don’t have it.
4. For pacing, and emphasis.
5. This is about Puck, but it’s also about Sean. I wanted the reader to see what he admires in people. After his indifference to the people in the second paragraph, we now see what catches his attention.
6. Pacing, and emphasis.
7. This is me conveying information about the subtle magic system and how it is that Sean handles the dangerous water horses. I want the reader to know that Sean’s skill is not by accident; he knows what he’s doing.
8. More of Sean’s prejudice.
9. “My beach.” By now, I want the reader to believe Sean when he claims ownership of the beach. Or if they don’t, I definitely want them to believe by the end of the chapter. This is me, too, referring to the way that he owns his water horse Corr — not in a fiscal sense, but in all the other ways that are important.
10. With so much going on, and so many characters, it’s easy to lose sight of the main players. Like a painting with a really busy background. This is me restating the piebald mare so that readers won’t forget about her.
11. Originally written so that all of the one liners were Sean’s careful control slipping.
12. I try, when I’m describing things, to make the reader FEEL what I’m feeling in the scene, rather than telling them out right. I want the reader to shiver without knowing exactly why. So instead of merely saying the wind is strong, I put myself in the moment (this is where hands-on research is so important) and remember everything that I felt. It is often the tiny details, like salt in your mouth, that will transport the reader, rather than the obvious things. Also, in this case, the things that he likens the wind to are things that DO happen on this beach (screams, drowning), so it serves as foreshadowing and making the island a character.
13. Pacing, emphasis, Sean’s lack of control.
14. Connecting Sean with the horses
15. A “murder” is the term for a flock of crows, but I liked it for the group of fractious horses. (See #12)
16. One of the things that I’m always harping on with drafts is that they need to be specific. Make it a book that can’t take place anywhere else, make so that it couldn’t happen to any other people, make it so that the plot couldn’t be told by anyone else. With this book, the specifics tend to get very horsey. I grew up with horses and rode them jumper/ dressage all through college, and one of the challenges was to convey that information and make the book feel SPECIFIC without losing non-horsey readers.
17. More of Sean’s prejudice. Although methinks he doth protest too much. 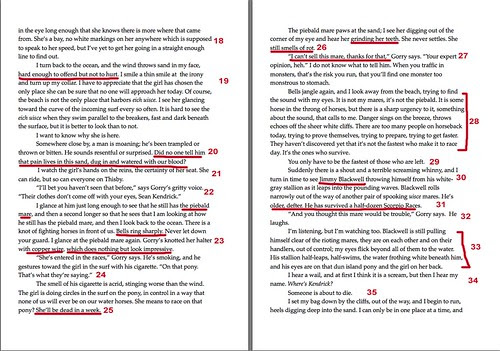 18. Sean’s connection with the horses; his respect but lack of fear for them.
19. Sean’s connection with the island (notice the echo with the paragraph before).
20. One of my favorite lines. One of those that I knew I’d do absolutely terrible things in the course of revision to preserve it if I had to.
21. More horsey information to make it specific, and also more of Sean’s attention on Puck. I need the reader to believe that he is intrigued by her despite his disinterest in most people that can be classified as, well, humans.
22. With a taciturn character, I like to have another character make an observation about his/ her behavior that they wouldn’t notice of themselves. In this case, Sean is totally checking Puck out.
23. More subtle magic. What works/ what doesn’t. Emphasize the piebald again.
24. Thank YOU, Gorry, for getting that information to Sean in a non-info-dumpy way.
25. Remind the reader of the stakes.
26. Although the piebald may be beautiful, Sean will never see it. He sees only pain and death when he sees her, and the descriptions show that.
27. Earlier, Sean had warned buyers off the piebald. This line serves as a follow-up to prove that Sean’s opinion is taken seriously on HIS beach.
28. Building foreboding and urgency — the reader needs to start feeling a creep on their skin. Something is about to happen here.
29. Stakes, again, and a promise of what will happen in the climax.
30. This is worldbuilding, actually, that Sean refers to Blackwell by first and last name. It’s a part of the way Thisby speaks —who your parents are and their parents were is just as important as who YOU are.
31. Admiration from Sean and a hint to the reader: this person might be a player, later.
32. Gorry’s off-handed joke shows how everyday the danger is on the beach; he’s inured.
33. When writing action in first person, it always has to be seen through the “camera” of your narrator’s eyes.
34. Further reinforcement of Sean’s position on the beach. If you don’t believe that he’s earned the right to call it “his” beach by now, I’m in trouble as an author.
35. Pacing, stakes, emphasis. 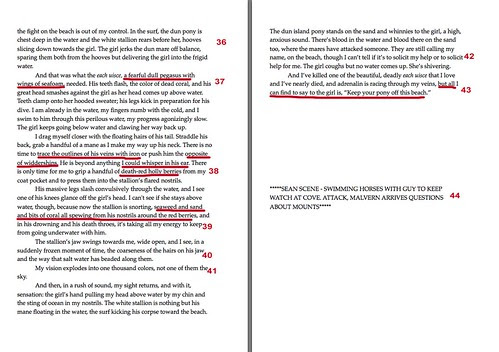 36. When I get right into an action bit, the pretty language and description disappears. I need to keep the reader reading at the same speed as the action, which is fast. Sean doesn’t have time to notice much, and neither does the reader. Anything he does notice needs to be tied tightly to his personality.
37. Such as this. Sean loves the water horses, even at their most dangerous. Even as he’s trying to kill this girl, Sean sees him as beautiful.
38. The magic we mentioned early, slowly coming into shape. There’s no reason to info-dump.
39. Specifics, specifics. How is a water horse dying from any other horse dying? What are the little details that would stand out in the heat of the moment?
40. So often during a frenzied moment, I will notice one strange, unrelated thing, and that will become my memory for that scene forever after. I try to make the action FEEL as much like a real action scene as possible.
41. This sentence is from the original short story that I wrote about Sean and the water horses.
42. Pacing, pacing. Coming back up for air, I’m trying to recall for the reader that sense of flashing images as the world slows back down again.
43. Edges. The whole chapter was about a girl on the beach, and this book ends it.
44. Just in case you were wondering what my thrilling outlining process looked like while I was writing a rough draft. 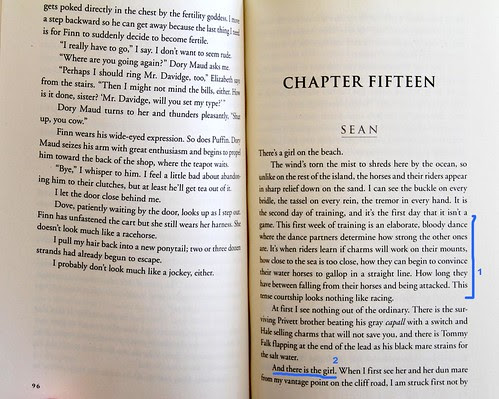 1. Originally, this sentence was merely “It was the second day of training, and the first day it wasn’t a game.” Edited to expand upon this and give readers a better sense of what that first week of training entailed.
2. This was originally on a line by itself, but ultimately, the one-liner asides detracted from the pacing and made the scene a little unwieldy. I could get Sean’s unease across without resorting to gimmickry. 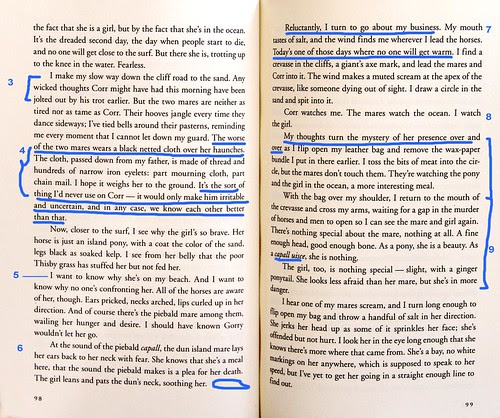 3. Sentence added to tie into the action of a previous chapter and make the scenes flow together better.
4. Edited to put the cloth on one of the mares instead of Corr, because as I’ve written along, I realize I need for Corr to react poorly to the magic and tricks of the trade. Added line about weighting the mare to the ground to foreshadow a later scene Sean has with her.
5. Edited to put the solo line in with the rest of the paragraph for pacing.
6. Broke this paragraph into two to allow the reader to read it faster, and also to put the focus of the subject from Sean’s wariness to the mare’s fear. Deleted the last sentence in the paragraph because it’s redundant.
7. Clarifying and setting Sean’s purpose for being on the beach.
8. Tidying and compressing the relationships between the horses, Sean, and Puck into one tiny sentence, isolated to draw the reader’s attention to it.
9. Streamlining these two awkward paragraphs — mostly you’ll notice it’s the edges I’m attacking. Changed “each uisce,” the traditional Scottish name for water horses, to “capall uisce,” which is still unpronouncable but slightly more phonetic, and also Irish instead of Scottish. 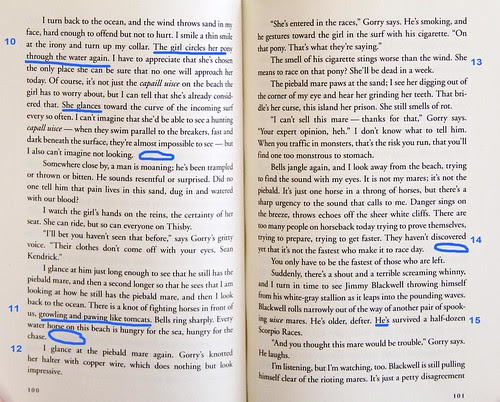 10. Added sentence for clarity and flow, again, by reading aloud. Deleted that one standalone sentence of Sean’s thoughts, because it was unnecessary.
11. Needed some more mood and setting in here. Removed Sean’s redundant thought at the end of this paragraph.
12. Put this on its own line for pacing, better readability.
13. Tightened this paragraph to say the same thing, but better.
14. Removed redundant sentence at end of paragraph.
15. Put in contractions. Sean was starting to sound like a geezer. 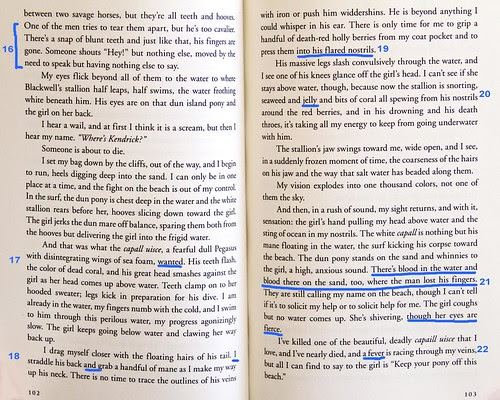 Man, I hope this is at all helpful, because this is the world's longest blog post. If you have questions, post 'em in the comments, and I'll edit the post to reflect the answers.
Posted by Maggie Stiefvater at 10:25 AM