Okay . . . so it is that moment. That moment where I reveal what MagicalNovel is really about. On Monday I mentioned that it was the most ambitious thing I’d ever tackled and I showed MagicalNovel’s baby photos, and then I encouraged readers to guess what it was about, with hilarious results. (One reader — Cathrine M.H. — did get it precisely right and I will be sending her something prizey).

But now the guessing is over. It will be coming out September 18th of this year, and here is the cover. 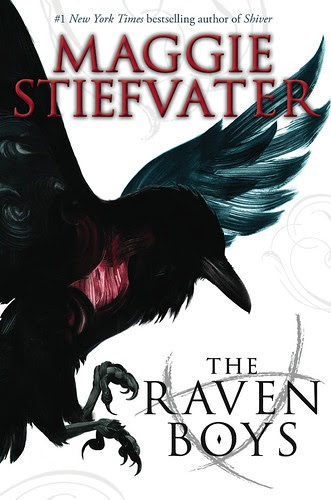 *cuddles it some more*

And here is the official summary:

Filled with mystery, romance, and the supernatural, The Raven Boys introduces readers to Richard “Dick” Campbell Gansey, III and Blue Sargent. Gansey has it all—family money, good looks, devoted friends—but he’s looking for much more than that. He is on the hunt to find Glendower, a vanished Welsh king. Legend has it that the first person to find him will be granted a wish—either by seeing him open his eyes, or by cutting out his heart.

Blue Sargent, the daughter of the town psychic in Henrietta, Virginia, has been told for as long as she can remember that if she ever kisses her true love, he will die. But she is too practical to believe in things like true love. Her policy is to stay away from the rich boys at the prestigious Aglionby Academy. The boys there—known as Raven Boys—can only mean trouble. When Gansey and his Raven Boy friends come into her life, Blue realizes how true this is. She never thought her fortune would be a problem. But she was wrong.

So . . . there it is. I feel weird releasing this into the world, because it feels like such a different sort of project for me (which I now realize I have said every time I announce a new book). I’ve never planned out a series so painstakingly before, nor worked with so many characters. I’m having more fun than you can possibly imagine.

Well, possibly you can imagine it. Just insert my face hovering above three bowls of a cookie dough. That emotion is quite similar.

I hope you guys love it. I leave you with the two songs iTunes informs me I listened to the most in this novel's playlist.


I realize the songs are very different, but so are Gansey and Blue. If you put those two tracks together, I think you have a pretty good idea of what this book is like.
Posted by Maggie Stiefvater at 5:31 AM