WHAT I DID ON MY SUMMER VACATION

I need to begin this by saying that I am not a beach person. I realize this may seem confusing, as the past few blog posts have been from locations such as Anaheim, San Diego, and Myrtle Beach. Places that have beaches, and if not beaches, sand, and if not sand, then sun.

I don’t really do sun either.

I’m more like . . . lichen. Wherever you can find lichen, that is where I would like to be.

There is no lichen in Myrtle Beach.

But my in-laws were there, as well as Lover and Thing 1 and Thing 2. Whether I was a beach person or not was irrelevant. Because this, my readers, was Family Beach Vacation. And the important part of this was not the beach, but the other two words. Family. Vacation. (If you rearrange the letters in those two words, you can also get CAVITY OF ANIMAL and TACO INFAMY VIAL. Coincidence? I think not).

I would be there, beach or not. So this is what I did.

1. My first act upon arrival at Myrtle Beach was to climb into the ocean with Things 1 & 2 and NephewMan. This was delightful, but upon returning to the beach house, I noticed that my thumb was beginning to feel funny. Warm. Nay. Hot. Nay! IT WAS BURNING! I slapped an ice cube on it. MORE BURNING. With my one useful hand, I clumsily typed NEMATOCYST into the search engine and discovered that when you have been stung by a jellyfish, freshwater makes the sting angry. Even if it is an ice cube. What is required, reader, when you have been stung on the thumb in the ocean, is vinegar, for that calms the nematocysts on your skin and makes them stop abusing you.

Which is how I came to spend an hour of the first day with my hand submerged in a bowl of vinegar. 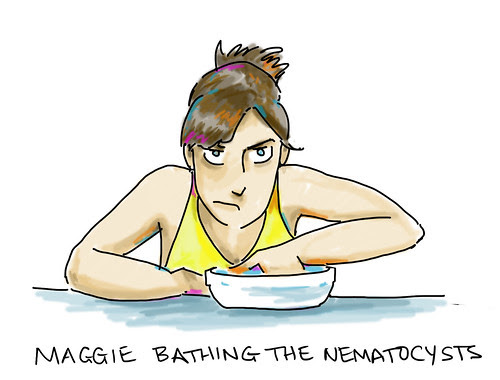 Later I used the remaining vinegar as a buttermilk substitute in some cornbread. But that is a different story for a different blog.

2. My second notable act at the beach house was to become fixated on sand sculptures. I had never really set my mind to one before, and in my head, I thought I could possibly resolve my not-a-beach-person-mentality by constructing a sand sculpture the size of an SUV. I know, it’s classic over-compensatory behavior, but that wasn’t obvious until after the fact. Anyway, I spent a few hours googling how to make sand castles the size of SUVs, and then Thing 1, Thing 2 and I journeyed out to the beach together. While they dug up marine life and put it in pails, I constructed a sea horse about forty times smaller than an SUV. The building itself was uneventful, unless you could the three 13-year-old boys who approached me to compliment both my pile of sand and my Ray-bans. Sure, it was warm and I was going to have sand in my arm pits forever, but I was pleased with my results.

And then I got into the beach house (are you sensing a trend here?) and I began to itch. Not just a little. A lot. And everywhere that my bikini had not been. Everywhere that sand had been. I tried showering and lotioning and complaining, but nothing seemed to help.

And then the bumps appeared.

They covered my entire body, like angry goosebumps or vehement orange peel. My. entire. body. I’m not sure I can describe the sex appeal here. 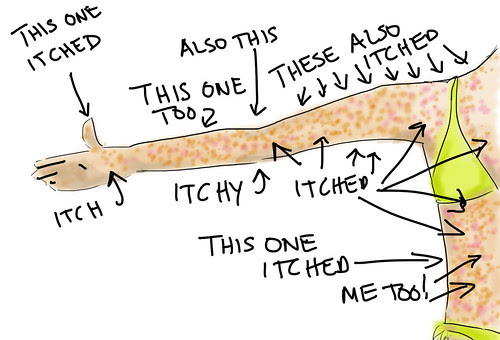 3. Which brings us to the end of the week. At this point, I was cranky and itchy and fearful of anything that looked like sand or sun or beach or fun. I lurked indoors while Things 1 & 2 played with my in-laws outside. This, I felt, was safe. Surely.

Now, the beach house (you should by now be uneasy when you hear it mentioned) was not terrible. A little small, a little tired, but it was right on the ocean and it only swayed a little bit when the wind blew. The kitchen was separated from the living room by two strangely formal columns. The chief purpose of these columns seemed to be tripping my father-in-law, who kept catching one side or another of his sandal on the square base of them before flying from one room to the other. Partway through the vacation I had moved chairs to block easy access to the columns but now, at the end of the vacation, we had to move all of the furniture back to where it belonged.

Which was when I mashed my toe into one of the columns.

Now, you know how when you stub your toe, you gasp and swear and shout that it is broken, it’s broken, and you’ll never walk again! But it’s really just the shock and dismay of the moment that makes you say those things. You really just jam your toe and ten minutes later, you’re fine. Because, really, when you break your toe for real, you’ll know it. It’ll swell up to twice its usual size and then it will turn purple-gray like a zombie, and then it will stop moving. 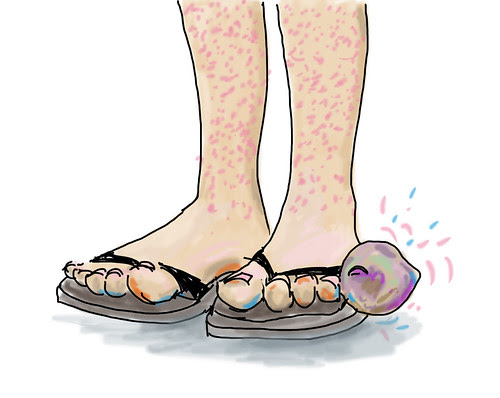 I can’t wear shoes until the middle of August. So now I am home and slowly the steroids are making the bumps and the itching go away, but my toe is still giant, and I think I just broke my manuscript. This is the face I am making at it. 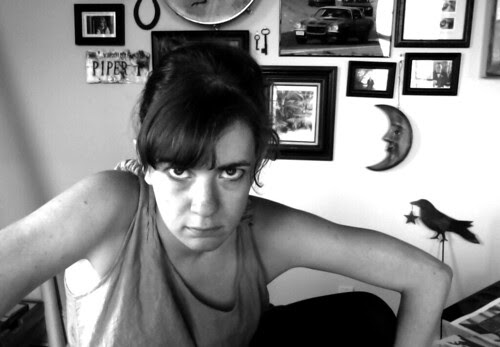 I cling to the hope of being able to put shoes on in just a few weeks. That is just before when I leave for rally driving school, which is MY idea of a family vacation. Surely, surely it will go better.

Although, when you rearrange the letters of RALLY DRIVING SCHOOL, you get:  SCHOLARLY OLD VIRGIN. So. There’s that.
Posted by Maggie Stiefvater at 5:26 PM