No, I Am Here. I HAVE Been Here

And by here, I mean on the Internet.

I know it might seem like the blog has been a bit dark lately, but it is not because I am not on the Internet. I'm working on a secret project, WhitePantsNovel, that I'll be able to tell you about soon, but it's been eating my large blocks of time*. So I've been snatching little posts here and there instead of full blog posts. In particular, a lot of my off-the-cuff stuff is over on Tumblr these days: http://maggie-stiefvater.tumblr.com/.

I TOTALLY AM HERE.

*I cannot wait to tell you about this. Cannot. Wait.

Oh, while I have you, though, here is a brief run down of things:

- The Raven Boys audiobook is available for free, no-strings-attached download from SYNC for one week beginning on June 13th.

- I am giving away an advanced review copy of The Dream Thieves on my Tumblr. It's an art contest. Details here.

- My critique partner, Tessa Gratton, has a very excellent novel coming out on the 25th, called The Lost Sun. It's set in an alternative U.S. where Norse religion is the norm, and it's great.

- I will be at LeakyCon in Portland at the end of this month.

I Sneak Into Your Brain And Make You Think My Thoughts

As I was driving two days ago, I had the most piercing and true realization that has ever been had about humans and American society. It was a dazzling thought-culmination of all of the thoughts I had had up to that point in my life. I had to reorganize everything in my mind to fall into line with this epiphany.*

*and I'm not going to tell you

Right after I had this flash of insight, I immediately had another one: that none of my characters could have an insight that I hadn't already had myself. Dazzled and revolted by this appearance of writerly limitation, I had three more realizations before I got back to my driveway:

1. I can't ever write a character who's more clever than I am!

2. I can't ever write a character who's funnier than I am!

3. I was supposed to be buying paper towels!

I know this is a bit of an oversimplification. On the surface, it also seems inherently at odds with my certainty that a good author doesn't only write characters who are versions of themselves. I still think that's true. I can take the most basic emotions — anger, jealousy, happiness, etc. — and use my experience of them to create infinite permutations and exaggerations and variations of those emotions. A never-ending cauldron of characters, right there. But unlike emotion*, humor and intelligence are not inherent in everyone.

And I really do think that being funny or smart are two of the very few things that you can't just extrapolate from other experiences. I can write a fearless character even if I am not fearless, for instance, or a fearful character, even if I am not fearful. But I cannot invent humorous situations if I don't have a sense of humor. And I cannot write an internal, brilliant philosophical observation for a character if I have not had it for myself.

I suppose one could simply copy a joke into a character's dialog to make them funny. Research a subject and blast facts out on the page for a smart character. Or just have everyone around them laugh at their jokes and be awed by their cleverness. And fake it the rest of the time. But as a reader, I despise being told a character is funny or smart when clearly they are neither.

I'm a massive proponent of indirect characterization. A reader can experience characters and settings in a novel in two ways: she can know them, and she can feel them. Knowing is technically all a reader needs in order to get the meat of a story. In the simplest sort of story, a fairy tale or fable, that's all there is. But feeling is what gets a story into your bones. It is how you infect a reader with your world.

For instance, in The Dream Thieves, I could have written:

Niall Lynch had three sons. The oldest, Declan, was a political creature, slimy and disingenuous. The youngest, Matthew, was incredibly delightful and everyone liked him without any effort on his part. And the sarcastic middle son, Ronan, was always belligerent. Their father was far more of an influence on all of them than their mother.

The reader would know everything I needed them to know about this family. It would be a perfectly fine basis for a story, I suppose. But I don't think it would get under anyone's skin. For that, I must be indirect. This is where that silly adage "Show, don't tell" comes from. Really what it means is that you do everything you possibly can to make the reader understand the truth of the situation before you spell it out for them.

Here is how I actually wrote that paragraph about the three Lynch siblings: 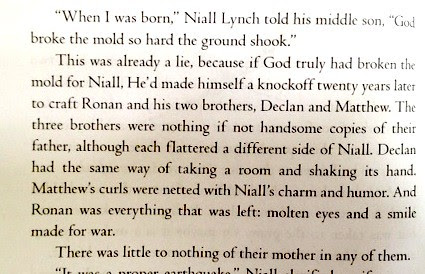 Here's a grand article Cheryl Klein wrote about Harry Potter a few years ago. In it, she points out that Rowling did tell you how a character felt, but only after she showed it to you first. So the telling served as a thesis statement, a topic sentence. Quite cleverly, she made sure that the reader both knew and felt the facts.

So: about characters being cleverer and funnier than the writer. Possibly one could get around this by direct telling. But I think that you'd rob yourself of emotional resonance if you did. Is the trade off worth it? Maybe. Are the writers of Sherlock as clever as him? Maybe I'm just not a good enough writer yet to think of a solution to this problem. Maybe it isn't even really a problem, because there are millions of character possibilities within my current mediocre level of brain power and humor.

I still need paper towels. Maybe I should go for a drive and think about all this some more.
Posted by Maggie Stiefvater at 7:58 AM
I Sneak Into Your Brain And Make You Think My Thoughts
2013-06-03T07:58:00-07:00
Maggie Stiefvater
how I write|
Comments